Not a Government Agency
The Floresville Chamber of Commerce is not part of the city or county government, although we work closely with those officials in economic development and other areas to improve the business environment and quality of life in the Floresville community.

If you would like to make any announcement regarding your business or up coming event your business may be having, we would be more than happy to accommodate you at the Lunch n’ Learns, please make your request in advance to give adequate time in the program, and to be respective to others and their time.

Why Get Involved with Your Chamber?

Membership in the local chamber offers numerous benefits and keeps business owners on top of important, ever-changing issues and trends within their community and local marketplace.

Memberships brings credibility to your business. Your membership identifies your business as one that has an interest in the community.

Chamber members are businesses and individuals that believe in taking action, rather than sitting on the sidelines. They know that being a member is an investment, not just in their business, but also in their community.

Chambers provide value
We serve as your connection to profit and growth through 3 core values and benefits.
1- Members doing business with members.
2- Our efforts to promote and advocate for our members.
3- Our constant focus to create opportunities for connections, education, visibility and support of our members.

Ways You Can Increase your Visibility in the Community
1- We list your business on our Online Member Directory on our website at www.floresvillechamberofcommerce.com
2- When your business hosts a Ribbon Cutting, it is shared through Facebook, email, and the Newsletter all for FREE!

Showcase Your Business
1- Sponsor a Chamber Event
2- Become a Sponsor at a Chamber Fundraising Event
3 - When your business is holding an event, send us an email or flyer, and we will share this through Facebook, email and our web page.

Members supporting members is a Chamber's philosophy. We encourage our members to look to their fellow Chamber members when they are looking for a place to eat out, needing a haircut, having their vehicle serviced, buying a home, or getting a loan, for example. When we support buying from each other, we invest in each other, keeping our local economy strong.  It's the right thing to do!

Your Local Chamber of Commerce:
A Powerful Tool For Business Growth.

Chambers of commerce are a powerful tool for your business growth-but every business must advertise that it is  member of the local chamber of commerce to reap the results; Business tend to experience more frequent purchases and positive reviews when consumers are aware of that business's active involvement in the local chamber.
A Membership In Your Local Chamber of Commerce is Priceless.

Join our Board of Directors! 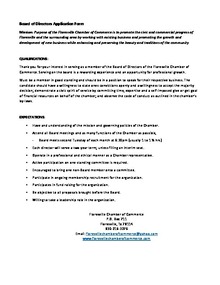 PDF
Learn about our mission, qualifications, and expectations of our Board of Directors. You may fill out the application and return it to our office.

PDF
Become a member and join the Floresville Chamber of Commerce and start networking with other businesses, as well as take advantage of Chamber benefits! 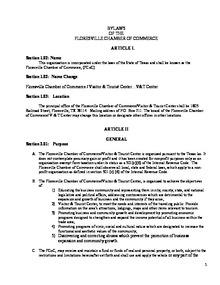 Floresville was named for Don Francisco Flores de Abrego, a rancher who established his ranch about six miles northwest of the current location of Floresville in 1832. In 1833 the nucleus of the present town was founded on land donated by the Flores family; it became the Wilson County seat in 1885.

Flores de Abrego’s ranch followed in a farming and ranching tradition already 100 years old at the time of his settlement. Rancho de las Cabras, or “the goat ranch,” was established near present-day Floresville in the mid- 1700s as a grazing ground for Mission Espada. The rancho was located about 30 miles southeast of Mission Espada, on the San Antonio River, near present-day Floresville.

Rancho de las Cabras was a place to raise cattle to feed the Spanish priests and the Indians who lived at Mission Espada. Missionaries trusted certain Indian vaqueros, or cowboys, to live on the ranch and take care of the animals. These Indian cowboys lived with their wives and children on the ranch. Once a week, seven or eight head of cattle were brought from the ranch to Mission Espada. These were some of the first cattle drives and were quite dangerous due to the hostile Indians along the path. The ranch eventually was shut down because Espada was taken over by the government, relieving the church of the job of feeding the Indians.

Apache raids in the late 1770s caused problems with the rancho system. The Spanish government took over ownership of unbranded cattle in 1778 and in the early 1800s, the rancho lands became the property of the people who had been living there and of new settlers to the area.

All of the animals in the rancho had a different purpose other than meat and there was often a surplus. Oxen plowed, cattle produced hides, soap, grease, and horns for carving and other uses. Horses provided were used for transportation and helped to herd livestock. Cattle, sheep, goats (although there weren’t many) and pigs were food. Sheep provided wool, and goats produced milk.

On September 15, 1995, the National Park Service acquired a small section of the former ranch from the Texas Parks and Wildlife Department. It is now a a part of San Antonio Missions National Historical Parks. The park service plans to restore the Rancho de las Cabras if they can get the money. In 2015, the United National Educational Scientific and Cultural Organization (UNESCO) listed collectively San Antonio's five Spanish collonial missions and the Rancho de las Cabras in Wilson County as a World Heritage Site.

Today, with a growing season of 285 days, Floresville is a marketing point for watermelons, flax, cotton, beef cattle, dairy and poultry products. A huge peanut on the courthouse lawn recognizes the peanut crop grown in the area and the community’s annual Peanut Festival. read more

About Floresville Chamber of Commerce

The purpose of the Floresville Chamber of Commerce is to promote the civic and commercial progress of Floresville and the surrounding area by working with existing business and promoting the growth and development of new business while enhancing and preserving the beauty and traditions of the community.

The Floresville Chamber of Commerce is located at
1805 Railroad St., in Floresville (see map on the right).